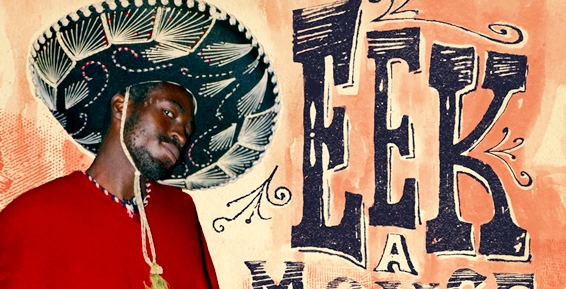 I have been very complementary about VP’s Reggae Anthology series over the past two years.  The series has given us some truly great compilations of old, new, and unreleased material from several of our favorite artists including Gregory Isaacs, Barrington Levy, Dennis Brown, Mighty Diamonds, Freddie McGregor and more.  Just last week, VP came correct once again with EEK-OLOGY, the Eek-A-Mouse Reggae Anthology.

Eek-A-Mouse, born Ripton Joseph Hylton emerged in the late 1970s as a member of a new crop of vocalists and sing jays who, along with guidance from producers like  Linval Thompson and Henry ‘Junjo’ Lawes, and a harder, faster sound from Roots Radics, transformed the sound of reggae forever.

Eek-A-Mouse popularized a style of singing/chanting originated by U-Roy and Big Youth called sing jay.  He released his first two singles while still a university student and spent several years on the sound system circuit before hooking up with producer Joe Gibbs, for whom he recorded the playful “Once a Virgin.”  He then recorded the first cut of what will eventually become his most well-received tunes with Douglas Booth “Wa-Do-Dem.”

The first tune he records with Linval Thompson is the stellar “Modelling Queen.”  Linval produced the Mouse’s debut album Bubble Up Yu Hip (keep an eye out for the re-issue of this impossible to find treasure from the Hot Milk label!) shortly thereafter.  In the 1980s he moved on to work with Junjo, recording hits like “Wild Like a Tiger”, “For Hire and Removal”, “Do You Remember”, and “Ganja Smuggling”.  His career began to spin out of control after his stellar 1991 album U-Neek.  Rumors of alleged drug abuse, alleged steroid abuse, and wild mood swings began taking it’s toll on a man who seemed to tour 365 days per year.

EEK-OLOGY includes a selection of his essential and classic hits from his first two singles “My Father’s Land” and “Creation” in 1974 through 1991’s U-Neek album.  It features several of his early Joe Gibbs recordings, such as his 1979 breakthrough single “Once a Virgin”, the Linval Thompson-produced “Modelling Behavior” and his long list of early 1980’s hits with producer Henry “Junjo” Lawes.  They are all included and they sound as if they were recorded just yesterday.

All in all a great set and on par with the previously released anthologies.  VP has done a bang-up-job selecting tunes from several seminal periods in his career.  The liner notes by Harry Wise give the listener the crucial context needed to digest this ‘u-neek’ set.  Also included are rare photos from the treasured archives of Beth Lesser.

It is interesting that VP chose not to discuss the large, white elephant in the room – the thing that most fans purchasing the album most want to know:  “Where is Eek-A-Mouse?”

They do not discuss anything with respect to the crimes he pled guilty to in a Dare County, North Carolina court room in July 2013 for alleged crimes committed in 2008.  Nor do they discuss the fact that he spent the past several years of his life hiding in a South American border town as a fugitive from the U.S. Justice system.  They simply present the very best of his work as one of the most popular, most recognizable Jamaican reggae artists of the past 30 years, and for that I give them a nod.

They are a record company, not a news reporting agency.

The EEK-OLOGY Reggae Anthology set is an adequate and commendable introduction to one of the most intriguing characters to ever emerge from Jamaica and surely one of the best reggae releases of 2013.