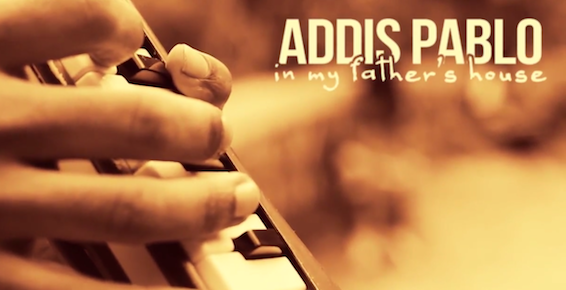 LONG-AWAITED DEBUT FROM ADDIS PABLO IS NOTHING SHORT OF EXTRAORDINARY

I could say that Addis Pablo’s In My Father’s House (JahSolidRock) is the first great reggae album of 2014, because it is, however it is also so much more.  First and foremost, In My Father’s House is an unbridled, unrelenting, and unapologetic Rastafari record from start to finish.  It is also a fitting tribute to Augustus Pablo, the undisputed King of Dub, by the young Prince Pablo who has a deep and abiding overstanding of the significance and influence of his father’s contributions to Jamaican music.  A musician’s musician to the core, Augustus Pablo could compose a dub masterpiece in the morning, arrange the music of another artist’s album at noon, discover and mentor new and emerging talent in the afternoon, and sit in as a session musician at night.  As he explained in my 2012 interview with him, Addis Pablo played witness to it all.

“Like most little boys, I just wanted to be with my father all de time, you know.  So I spent a lot of time in the studio with him, especially in the 1990s.  When his health started to deteriorate you could see it.  The toll the business took on him both internally and externally, it was painfully obvious.  He became less and less active.  I remember he used to take me on bicycle rides through the mountains.  We could no longer do things like that.  I was 9 years old when he passed.

I think for those who seek the knowledge and study the music it is be obvious that my dad is like a pillar or a cornerstone.  So many people have been inspired by his sound, as well as his person.  Being a creative man and doing what he heard and not what others heard, he could hear and create sounds that will stand out for all of time.”

Reggae Revival artists looking for that authentic sound and vibe are already calling upon the Suns of Dub for help.  Just check Jah9, who opened her much anticipated and critically acclaimed album NEW NAME by singing the vocal to the title track over Pablo’s “Call of the Righteous” riddim (brilliantly produced by Rory Stone Love I believe), or last year’s collaboration with Sizzla, Chronixx, Protoje, Kabaka Pyramid, and  Suns of Dub on Selassie Souljahz.  Addis and RasJammy released a 10″ dub of the tune titled “Selassie Souljahz in Dub” which I chose as the best reggae record for 2013.

In My Father’s House is a tremendous debut for Addis Pablo and collaborator/producer RasJammy Triniyard.  Recorded at House of Riddim, Austria and at R.D. Musiq, Rotterdam by Sam Gilly and Rekesh Dukaloo, the album is brilliantly produced, tracked, and mixed. The Suns of Dub take us on a musical journey which starts on the “Road To Addis,” a rousing melodica-laden tune that hails the most fundamental tenet of Rastafari – repatriation.  Pablo is strong and agile on the melodica and the production is exceptional.  In My Father’s House is a reverse showcase album of sorts with an instrumental track followed by a vocal and dub.  “Evolution/Evolutionary Rockers” is multi-layered vocal and dub featuring Rockers alum Earl “Sixteen” Daley who blesses Pablo’s riddim with his unmistakable vocal singing on a positive, forward looking vibe.  Daley voiced “Changing World” and “Rastaman Is A Peaceful Man” for the elder Pablo, who introduced Daley to ital livity.

Pablo and RasJammy then find themselves “In A Gideon”, a heavy steppers tune that will surely find its way onto Shaka’s turntable.  The great Sylford Walker brings a mystical vibe to “Gideon Rockers.”

The the album builds and becomes stronger track after track, with the highlight being the middle part of the album starting with “His Majesty” and “Giving Thanks,” which sounds like a battle hymn as His Majesty leads the Abyssinians into a brutal battle against a colonialist Italian empire.  Pablo channels the far east sounds of his father in “Walls of Jericho” , “Wareika Mystic”, and “One Love, One Heart, One Family” all of which were released as 7″ vinyl singles on the JahSolidRock/OnlyRoots label.

If I’m forced to choose a real standout track on the album, I’d have to say that “Thanks and Praise” featuring Chezidek is as good as it gets.  Words do not do justice to the sound and vibe of this heavyweight Rockers treasure.  I had high expectations for In My Father’s House, and I was sure that there was no way the album could live up to my expectations.  Addis Pablo and RasJammy knocked me flat on my back with this tune.  Chezidek doesn’t just sing over the  “Wareika Mystic” riddim, he transforms it, claims it – signed, sealed, delivered, it’s his.

With In  My Father’s House, Addis Pablo and RasJammy plant the Rockers flag firmly atop Wareika Hill and lay claim to this music in a way that few others have done.  This is the sound of redemption.  Artists will no longer get away with inorganic, inauthentic, and uninspired garbage laptop productions.  This is the album that makes you question why some are even in the business of making music.  It is that superior of an album – just heads and shoulders above the rest.  The bar has been set and and artists better come correct.

So Jamaica, stand up, stand strong and be proud.  Your prodigal son has returned.