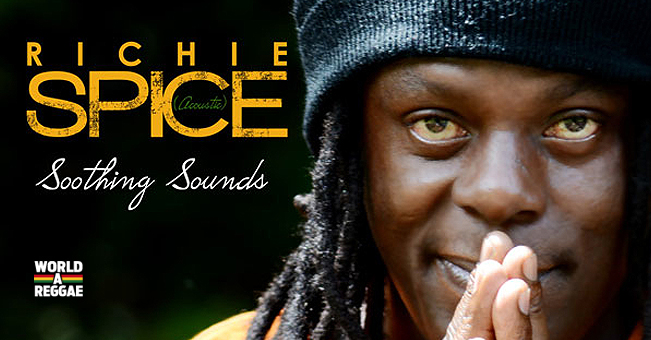 Tad’s Record’s latest release comes from conscious reggae icon Richie Spice, with his new album Soothing Sounds: Acoustic, now available for pre-order on iTunes and worldwide on Tuesday, October 23, 2012 . Born Richell Bonner in St. Andrew, Jamaica, the Prince of Reggae teams up with Tad’s Record and some of reggae’s biggest hit-makers on this 15-track acoustic opus of socially-conscious, roots reggae tunes that have made the entertainer an international staple for reggae lovers.

Soothing Sounds: Acoustic is a masterpiece collection that is testament to the evolution of Richie Spice, showcasing an eclectic mix of musical elements that fuse classic reggae vibes with modern day acoustic rock, Spanish guitar, jazz and African drum beats. The first single, an uplifting call for unity titled “Free,” is currently available on iTunes, and remains in heavy rotation in Jamaica and across reggae airwaves, worldwide.

The video for “Free,” produced by Richie Spice and directed by Scorpio 21, debuted on television channels in Jamaica last week, and gains traction for the growing classic. The video depicts the plight of people who are chained to material influences, but through being true to themselves, they break those shackles and eventually become free, and find happiness therein.

“It was important for me to do a song like ‘Free’ because so many people are not,” reveals Richie Spice. “I want to encourage everyone, everywhere, who is tied down and pressured to be something they are not, to be themselves. Free up yourself, and you will find truth, light and happiness in that freedom.”

The second single “Crying,” which depicts Spice’s signature chanting-style as he conjures socially-conscious questions, is also enjoying airplay on radio, and is now available for sale on iTunes. The “Crying” video was just shot on location in Jamaica and will be released later this month. Standout tracks such as “True Love,” “My Heart” and “My Girl” put a new spin on classics from Spice’s esteemed catalog. Spice enlists help from some of reggae’s top musicians, including Mitchum “Khan” Chin who co-produced the album, Robbie Shakespeare and Stephen “Lenky” Marsden. He also makes it a family affair with his brothers Spanner Banner and Snatcha Lion on the collaboration “More Love.”

“The response that we have been receiving since publicizing the release of Soothing Sounds: Acoustic was so overwhelming, we knew that we had to put the product up for pre-order,” states Tad Dawkins, President of Tad’s Record. “Richie Spice’s credibility as an artist of exceptional quality is obviously known and applauded and so, once again, we must say that it is our esteemed pleasure to be affiliated with such a great artist.”

Soothing Sounds: Acoustic is now available for pre-order on iTunes, and will be available both physically and digitally worldwide on October 23, from Tad’s Record. For further information on Richie Spice, including upcoming tour dates, log on to Richiespice.net, and follow his musical mission at Facebook.com/RichieSpiceMusic and Twitter.com/1RichieSpice.