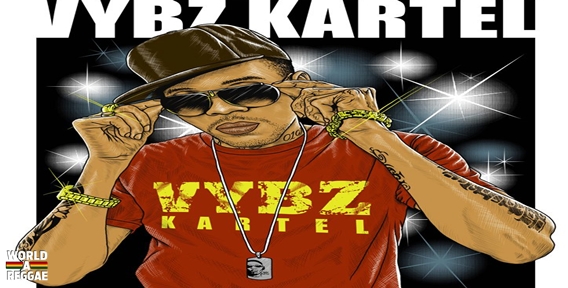 Adidja Palmer is Dancehall’s one‐man cartel—a razor‐sharp lyricist with the type of style, delivery, and dexterity that made him an instant success; a keen business man that has launched several successful brands; and the leader of one of the Dancehall industry’s most powerful troupe of formidable talent. Over the past nine years, Palmer has made an indelible mark on Jamaica’s wildly popular urban music landscape as the indomitable Vybz Kartel. ..

Crossover singles like “Tekk,” “Gun Session,” and “Ramping Shop” have earned Kartel international recognition, in addition to collaborations and remixes with Hip Hop and R&B stalwarts like Jay‐Z, Rihanna, Missy Elliot, M.I.A, Pharrell, Kardinal Offishal, Akon, and Jim Jones. In recent years, he has been nominated for Source, VIBE, and MOBO awards. In 2009, Kartel has had six number one singles in Jamaica: “Last Man Standing;” “Million By A Morning;” “Ramping Shop” featuring Spice; “Mama;” “Dollar Sign;” and “Completely” featuring Indu. In addition, he scored two international hits with “Ramping Shop” debuting on the Billboard Top 100 Singles charts, and “Dollar Sign” being in regular rotation on popular urban stations in the U.S. This year he was also recognized by the EmE (Excellence in Music and Entertainment) Awards for Song of the Year, Lyricist/Songwriter of the Year, and Male Deejay of the Year.

After splitting with Bounty‐Killer led Alliance in 2006, Kartel founded the Portmore Empire, a fiercely talented group of up and coming Dancehall deejays and singers from his Portmore neighborhood that he signed to his newly founded Adidjahiem/Notnice Records. Members of the group are: Vybz Kartel, Blak Ryno, Shawn Storm, Doza Medicene Merital, Jah Vinci, Popcaan, Indu, Gaza Slim, and Sheba.

In 2008, Kartel launched Vybz rum and Daggerin’ condoms. The rum is yet to be officially distributed, but is planned to be done by Vybz Distillers Limited, a subsidiary of the company that created Pimp Juice.