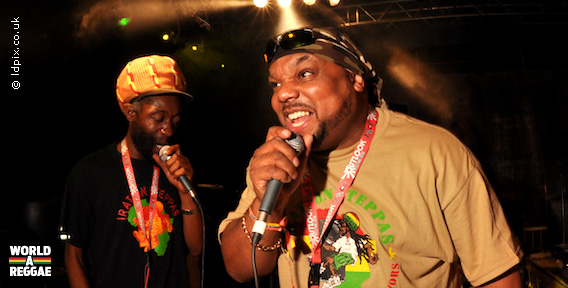 Iration Steppas are one of the top DubWise SoundSystems in the World, They started as a SoundStystem in 1990, firstly just spinning Dubplates, then making their own music. They have played all over the UK, Europe, the USA and soon, in Japan. After some delay the are just about to release their latest album, Mark Iration gives us some history:

I’ve been collecting music and vibes for a long time now, I used to follow a lot of Sound Systems like Jah Shaka’s and Jah Tubby’s back in the 70’s and 80’s. Iration Steppas only started off as a sound system because my friend Sam Mason (who recently passed away) encouraged me. I said ‘Bwoy, it’s too much trouble and hard work, you know’. But since then things have taken off. We’ve played with both Jah Shaka and Jah Tubby’s. It’s a great honour.

At the same time as Djing, I started to make music, building up our own tracks and making them more diverse, making it more universal, making it more dimensional, keeping it to the roots and the core of the dub music I love. Those tracks were kind of wicked, people loved them so we released tracks like Scud MissileandHigh Rise Vibrations.

I used to go to the House of Roots on Sundays down in Vauxhall, London, bumping into quite a few artists around that time, Keety Roots, Blacka Mix, Disciples, people like that. In 93/94 I’d gone to buy some dub plates for the sound system and was talking about music including music by Dennis Rootical.
He overhead me, came over said ‘Yo, Yo, Yo Bredrin! I heard you talking about a certain music you want to get. I built that tune there!’. So we got talking and he’s been my partner ever since. We started building tunes like Killimanjaro, Reminiscence and our first album Original Dub Dat. We haven’t looked back, just got tighter and together, stronger as friends, stronger as bredrins, strong in making music and in the studio. We just had a vibe and the Iration Steppas Crew is strong.

We’ve also got another band called Kitachi which is different, more like trip-hoppy, dubby, ambient kind of music. We got signed to a label and did a lot of touring and actually linked up with a lot of different artists at that level, Prodigy, Reprezent, Dredzone, Brian G, Jack Frost and Grooverider & Fabio.

Iration Steppas are now putting out our new album Dubs From The Higher Region. People have been waiting a long time for it but due to us being busy, up and down, here and there, this, that, the other, things sort of got out of hand. But like you know the saying goes ‘all good things come to those who wait’ …so, sorry people, you’ve waited long enough and now it’s time to give you the sound to you, so here it is. Play, play, play, skank, skank, skank!.

It’s the year 2003 and we will be playing many dances from now ’til years to come, Jah willing, all being well. We hope we can keep you all happy, interested still in the dubwise scene, keep supporting dub, respecting dub and we hope to see you supporting Iration Steppas and other sound systems ….RESPECT!!! GIVE THANKS!!! IRATION STEPPAS….JAH RASTAFARI PROTECTION!!!”