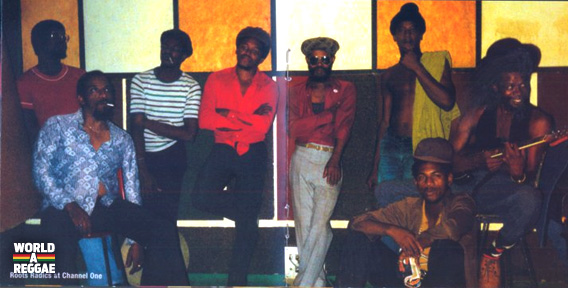 The premier studio and live backing band in Jamaica from 1978-2010. The band had been playing together as a core of Bingy Bunny, Flabba and Style Scott many years before this however, when they were known as the Roots Rock Band.

The new name “ROOTS RADICS” was chosen when they developed their sound into a new style of Reggae often referred to as Rub-A-Dub. In less than a year the new style created a major hit with Barrington Levy’s Bounty Hunter single and the Radics continued making hits for the next 5 years in the studio and in concert. Marathon recording sessions for the top Producers in Jamaica at the time are legendary. Even with the volume of recordings they made in a 7 year period the quality and consistency of their very unique sound remained extremely high.

The next dominant style of Reggae was Dancehall which has continued to stay popular until today, can trace its beginnings directly to Rub-A-Dub, during the mid 80’s the Roots Radics played both Dancehall and Rub-A-Dub, which are really not all that entirely different in the first place..

Their impact on Reggae music is immeasurable. When you consider that for several years in the first part of the 1980’s the Radics had played on close to 70 percent or more of a years top selling singles in Jamaica you can only begin to understand what they have accomplished in their ongoing career. Their signature style has been copied by many in the music world. Over the last 30 plus years they have built a solid following and have a reputation in the industry of guaranteeing a hit and success for those that work with them.

It would be alot easier to name those Reggae artists that have not recorded or performed with the Radics than those that have. (maybe thats a stretch nowadays)

Their classic open yet heavy style continues to be relevant, popular and in demand with todays Music world. Instantly recognizable and heavily borrowed from. Their sound is defined by the space between the notes and the precision with which they play.

This is the sound of the Roots Radics!!