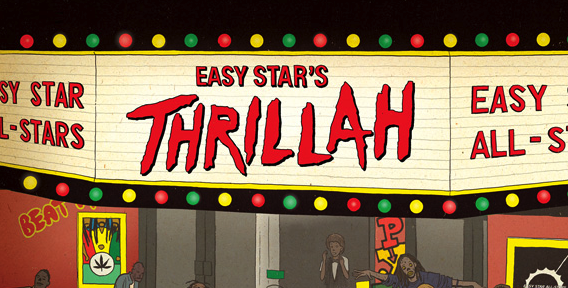 I recently had the opportunity to interview Michael Goldwasser of NYC’s Easy Star All-Stars about their new tribute album, a dub interpretation of Michael Jackson’s landmark 1983 album Thriller.  One listen to the first single off the album, a Luciano-voiced “Billie Jean,” tells me that this could be their best yet.

Easy Star All-Stars are primarily known for their critically and commercially successful dub-tribute albums Dub Side of the Moon, Easy Star’s Lonely Hearts Dub Band, and RadioDread.  Through incessant recording, touring, and fan-building, Easy Star basically paved the way for the new wave of American reggae acts that have been so successful of late.

Thrillah is slated for an August 28, 2012 release date.  The band will be hitting the road this summer and through the second half of 2012 in support of the album.  Visit their website to get the latest information on the album and tour.

“We chose Thriller for several reasons.  First of all, it’s always good to shake things up – we’d done three albums from the world of rock and it would be too obvious to keep going down that path.  (And) It makes so much sense to do an r&b album since r&b has always been such a major influence on Jamaican music, from ska in the early 60’s to the most current dancehall.  Just as he is all over the world, Michael Jackson is revered in Jamaica like few other artists.  But most importantly, we always want to do albums that are made up of great and interesting songs that will be cool as reggae, and Thriller certainly fit the bill.  It’s also part of our mission to spread reggae to new people, and by taking on the best-known album of all time, we feel that we are able to do that on a larger scope.”

Was there a close second choice (my guess was Wilco)?
“There were several “second” choices, but I’d rather leave it at that since we want our next album to be as much (as) a surprise as possible.  Of course, we’ve had it happen in the past where things that were second choices then didn’t get close the next time, for whatever reason. But it was not Wilco! “

So the first single “Billie Jean” sounds great (I had my doubts).  Luciano’s voice is in top form-just incredible. Was it difficult to convince him that this could work?

“Not at all.  I’ve had a great relationship with Luci for many years now.  He always comes correct and in this case was very enthusiastic about the song.  He was actually very excited after he voiced and he really felt like it was a hit.”

A highlight of all of your tribute albums is the guest musicians. Who can we expect to hear on Thrillah?

“Well, in terms of singers, we’ve got Luci, Michael Rose, Steel Pulse, Mojo Morgan, Mikey General, Spragga Benz, Christopher Martin, The Green, and Cas Haley.  We’ve also got vocals from Easy Star All-Stars members such as Kirsty Rock, JoWil, and Ruff Scott.  I also called in several guest musicians on this one, people that I had always wanted to get on our albums, such as Yossi Fine on bass (David Bowie, Lou Reed) and Joe Tomino on drums (Dub Trio, Matisyahu).”

Are there any artists you haven’t worked with yet that you would like to work with?

“I’ve been blessed to have worked with most of my favorite reggae artists already.  I’d really like to work with Damian Marley one day though.  I’m also a big fan of Julian Marley – I feel like he’s vastly underrated.  There are also many great artists from outside the reggae world that I’d really love to work with – it’s not about genre; it’s about making great music.”

I recently wrote a piece about NYC’s Subatomic Sound System. Can you talk a little bit about the state of dub in NYC?

“I have spent so much time in the studio over the past few years that I’m not out on the scene as much as I used to be.  But there are many producers and musicians out there who are keeping things fresh and vital.  There are those who take a more traditional approach to dub (as I do), applying vintage techniques and equipment, as well as somewhat of an old-school ideology as to what dub is, but there are also plenty of people in NY that are stretching the boundaries of dub and incorporating influences from other styles of music and all of the latest technology.  And there are also people who are applying dub techniques to other styles of music, so that you can have “dub” that isn’t even rooted in reggae.  The number of shows and parties in the scene ebbs and flows over the years, but there is always something happening worth checking out each week.”

With regard to dub, who is doing the most interesting stuff right now?

“I can’t really say….I’ve never really thought about it in those terms.  Most of the people that created the dubs that influenced me the most are either dead or aren’t really actively making dub, but still, it is amazing to see how prevalent dub is in so much of the musical landscape today. We are just happy that the Easy Star All-Stars have been able to be an important player in the spread of dub’s influence.”
What are your thoughts on the new wave of American-grown reggae acts, some of which are on your label,  while Jamaica is seeing a decline in homegrown talent?
“I’m much happier with the state of homegrown reggae in the U.S. now than I was ten or fifteen years ago.  I feel like back then, many American artists were unwilling or unable to move past sounding like Bob Marley clones.  Now there is a lot more diversity in what’s out there, and more and more youth are being exposed to reggae music in different forms and are excited by it.  More importantly, a lot of bands are working hard to build up the scene through touring, networking, and so on. To see the recent success of The Green, SOJA, Rebelution has been great, especially knowing we’ve been helping to foster the scene for almost two decades and we were personally involved in one way or another with each of these releases. But nothing would make me happier than to see a resurgence of quality acts coming out of Jamaica.  There are so many reasons for the decline of reggae in Jamaica – that’s really a whole other long interview.  We’d need to delve into the history of slavery and colonialism, as well as look at U.S. economic and political policy towards Jamaica.  And then of course, the music itself. But there are many talented artists in Jamaica; they just need to be nurtured and promoted the right way. Jamaican artists are looking at what the US bands are doing ­ touring, building up routes, audiences, networking with each other, with fans-which is an approach that can help them have long careers that can transcend the inevitable wave that comes and goes in dancehall/pop radio every few years. Groups like Steel Pulse and Israel Vibration are able to still tour because they put in the hard work building up audiences throughout the world.”
To listen to the single “Billie Jean” feat. Luciano on vocals, and to view the promo video, click HERE.