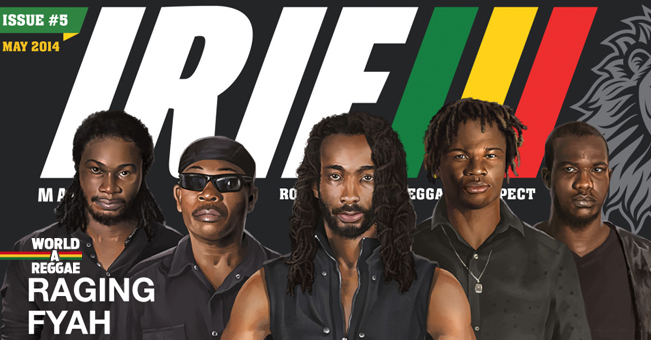 This Interview is recently published in Irie Magazine Issue #5 (may 2014) which is available for download here:

IRIE. In 2006, Raging Fyah emerged onto the reggae scene, playing as a backing band and now, you’re playing to an international audience. How does it feel?
It’s great! We definitely can’t complain. To start out as an underground group and now playing in front of a crowd of 30,000 overseas, it really is a warm feeling. And to see people appreciate the music and loving the music just as we love it, it’s really good man!

IRIE: You have an underground Roots Reggae vibe that IRIE loves. Tell us about it.
To be honest, we’re just playing the music that we love and hope that it will give us light across the world. In terms of mainstream or underground, we don’t really consider or categorize ourselves in that aspect. We just want to continue doing the music that we love and continue to have the same vibe that we have and hope that the rest of the world will continue to love it.

IRIE: Raging Fyah has such a unique sound, it’s uncomparable to other roots reggae group. Is your sound influenced or inspired by other music genres?
The influence is very, very wide. As much as our music is geared towards one genre which is roots music, we do listen to a lot of roots artists, we love Burning Spear, we love all those foundation artists like Peter Tosh. The key is, with Raging Fyah, because we are trained musician, we listen widely to other music. You will find that each member listens to some different. Gizmo, our guitarist, listening to a lot of rock music, he loves rock. You’ll find Kumar listening to some Led Zeppelin. You find me listening to some Coldplay. At the end of the day, It’s just because we are so musical and that we love all genres of music. When it comes down to the nitty gritty, when it comes down to Raging Fyah music, it’s still grounded in the roots and we still listen to a lot of roots music. But we still listen very widely. We appreciate all genres of music and we really get inspiration from all those guys and all those different genres. We do get influences and inspirations from their music as well.

IRIE: When it comes to writing/producing your music, is it a group effort or do certain members take on specific roles?
It really is a collective effort in all forms. For the lyrics, sometimes it depends on how we do it. Sometimes it might be just one person at home playing on the acoustic guitar and some lyrics might come to mind and then when he comes to see everybody, we finish it together. Sometimes, it might start by us jamming a riddim and we start vibing the melody and we write the song right their on the spot. We might have a riddim that was done long ago and we just decided that we are going to write some lyrics to it. It all depends. Sometimes it’s just the time and the situation that is going on now that inspires us as well. Sometimes, we are very observant when we travel. We see different experience and lifestyles and it pulls us in to write together to share our experiences.

IRIE: Can you share with us the message behind your music?
Yes. If you listen to the track, World Crisis, you can see we definitely touch some issues in the world that are right in our face. Some people are oblivious to what is going on in our world and we try to point it out to them. We’ve already started singing about things that are happening in the world, about perilous time that we are living in now. For example, some of these earthquakes and some of these things we see happening, to be honest, we think they are triggered by some source other than natural form. We start singing about it and other people share our opinion. We want to highlight some of the world wide issues.

IRIE: What do you say to those who don’t understand roots reggae music or choose to speak out against it?
Everyone is entitled to their own opinion and their own genre. To be honest, reggae is very deep, it’s very real. So probably one listening on the surface wouldn’t necessarily understand reggae in its true entirety. Honestly, to me, reggae is so spiritual. Reggae is different from all the other music just to how it comes together. If someone really and truly is listening from outside the genre, they would need to get a 101 lesson on where reggae is coming from and the vibration that it gives. And their mental space needs to be at a certain level actually to really get that kind of vibration. It’s the same thing with Jazz. It’s not that everyone can really sit and appreciate jazz or classical music if you are not in that mind frame. Reggae, as I say, is very spiritual. You have to get into the space to really get connected with the rhythm, with the lyrics, with the whole vibration of it together.

IRIE: Tell us about the upcoming album DESTINY? When can we expect the release?
The date is yet to be announced but we are looking to release it still in the first quarter. So no later than the ending of April… hopefully. The album is already completed. The songs and everything mastered and mixed. We should have the album in our hands in the next couple of weeks. Just tying up so other distribution deals and stuff like that. When it drops, everybody can have a chance at
getting it.

(At the time this interview was published the album was yet to be released, you can purchase the Destiny album below.)

IRIE: What does the name DESTINY mean to Raging Fyah?
Destiny.. as a name, suggests that everybody needs to find their destiny. In truth, it’s really a continuation of Judgement Day and Destiny now shows a lot of stuff. It shows the good times, the bad times, the happy times, the sad times. Too listen to it, you can get all that journey within the LP. The production for DESTINY is even a better production. That’s just my opinion. It’s a better production to me than Judgement Day. It’s getting deeper. We are going deeper into the topics, deeper into the music. One of the songs already release is NAH LOOK BACK. It shows our purpose as Rastafarian and as people that we are definitely on a journey and we are going places and we don’t have any attentions to give up. We have started and we see where we can go and we have that mission and that purpose. It’s a lot of encouragement just like JUDGEMENT DAY album that everybody will be listening to that never give up on your dream. Fight for what you want. that’s one of the songs. Fight for what you want. Don’t let anyone tell you that you can’t! Continue pursuing your goal. Never give up because you can accomplish whatever you will.

IRIE: What do you tell a young, new Roots Reggae group who thinks they can become successful overnight?
Not by chance. But by doing work. People really need to understand that it’s no fly by day. If fly by day works for you, well fine but from our experience, it’s definitely been hard work. I mean sleepless night, sometimes going to bed without food just because of sacrifices. It’s a lot of sacrifices. A lot that we put in for commitment and to make it work. It’s like a relationship. You’re definitely going to have good times and your bad times. And you’re going to have your quarrels and whatever it might be. But because you are committed to the cause, you are in it and you want it to work. You are definitely going to find ways to comprise and make sacrifices to make it work.
It’s the same thing with a band. Imagine five brothers working together. We are of different minds. We have five different individuals. We all saw the common goal and agreed to the same vision and the same purpose. It takes a lot of hard work to make that come true. It’s five different personalities.

IRIE: Can you explain Kumar’s role as Musical Director.
Kumar gets the opportunity to arranged stuff because he is of that personality who has a lot of ideas. We all do but we give him the responsibility to come up with some ideas for the shows as well. We give him the authority or first point to make suggestions.

IRIE: What’s in store for Raging Fyah in terms of touring this summer?
We are really looking to perform in some news places that we have never been. We are looking to do a lot of shows overseas. From early summer to the end of the year. We’ve already have shows booked for Sierra Nevada and some other shows that are being confirmed on the west coast in late June. Europe, we will be in Europe from July to August. We are confirming some gigs in Canada afterwards. We are really just looking to go and promote the Destiny album after it’s been released. So definitely a lot of shows. SO all the fans that are listening and that are subscribed to IRIE magazine can definitely look to see us live in their territory!

IRIE: Any advice for someone wanting to pick up an instrument for the first time to learn and play roots reggae music?
First thing first, love the instrument. Whatever instrument you are taking up, make sure you love it. Also, make sure you love the music. The other thing I suggest is keep it positive. Keep it clean. If it means going back to doing some research to listen to foundation artists. Do that because you will definitely learn a lot. Do good music that will live on forever more! Yeah mon!
Be open minded but at the same time be true to yourself. You can’t run away from yourself. You have to be true to yourself. There’s nothing wrong with being open minded, listening to other stuff for inspiration but at the end of the day, make sure you are true to yourself because that’s what people feel. That’s what the reflection that you want to come out from your music. You want to hear yourself to be heard, your lifestyle, whatever it is to come out in the music. So make sure you are being true to your self.

Thank you very much!