Grammy and Emmy-award winner Ziggy Marley, who recently released his fifth solo studio album titled FLY RASTA, takes a break from his current tour of the west coast summer music festival scene to talk with WORLD-A-REGGAE about his new album and current projects. 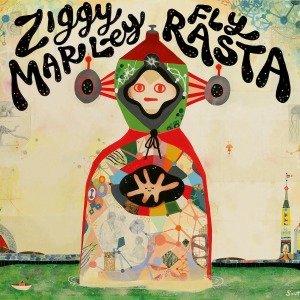 In 1979, an eleven year old Ziggy and his siblings Cedella, Stephen, and Sharon made their recording debut with their father, “Children Playing in the Streets”.  The Melody Makers’ debut LP Play The Game Right and Hey World!  followed in 1985 and 1986, respectively.  However, it was 1988’s critically-acclaimed and commercially successful Conscious Party that made Ziggy Marley & the Melody Makers a household name.  The group would go on to release six more studio albums between 1989 and 2000 before Ziggy embarked on a solo career.   Since going solo, Ziggy Marley has released five studio albums, including FLY RASTA, each featuring the musician’s eclectic and evolving sound which contains elements of reggae, rock, pop, folk, and world.

Along the way, Ziggy has allotted six Grammy awards (three since going solo) and a Daytime Emmy Award for his 2013 song titled “I Love You Too”, which was featured in the Disney Channel animation 3rd & Bird!.  In 2009, Ziggy released a childrens  book titled I Love You Too based on the song of the same title from his 2009 Grammy Award-winning children’s album Family Time. The Marley name has long been associated with activism and charity and Ziggy Marley leads the charge with his U.R.G.E. Foundation, which seeks to make enduring contributions to the lives of children in Jamaica, Africa, and throughout the world.

So yesterday WORLD-A-REGGAE caught up with Ziggy on his west coast tour.

WAR:  Greetings.  How are you?

WAR:  So big year for you, coming off another Grammy win for last year’s Live In Concert.  The new album hit the streets on April 15 and its now available at most shops in CD and vinyl and online stores as a digital download.  FLY RASTA…What is the significance of that title?

WAR:  As someone who has followed your career it seems that your music has really evolved since going solo thirteen years ago.  Each new album sounds very different at times than the one before, but you still seem to be grounded in reggae.  What are your thoughts on that?

WAR:  Are you bothered by being labeled as a reggae musician or that your music is labeled “reggae” music?  Is this something that bothers you?

ZM:  “No man, nah man, dis fine.  Because reggae was before me so I have taken on reggae as my foundation, as where I deal from, as my roots, you know.  People have labeled this sound “reggae.”  This is the sound where I am coming from.  Still, it does not limit me.  Just because it is where I’m coming from and it is my roots, it does not limit me.  I’m not limited to anybody’s idea of what that is.  Because I am an artist, I am a musician.  I am free.  My mind is open.  So, for example, on this album I decide fe anything that I can imagine, I must be unafraid to put it in the music.  Unafraid of what people may say.  Unafraid of what critics may say.  Because it is freedom and reggae music talk bout freedom all de time and this is freedom.”

WAR:  Your family being the musical family that it is…it seems that you involve them in your music in some way.  There are always contributions from your family on your records.  For example, on FLY RASTA you feature [sisters] Cedella and Sharon as background vocalists.  You even brought in Rica Newell (formerly of Melody Makers and Wailers) to do some background vocals as well.  Neville Garrick did the art direction and layout for the album.  Does this make the music stronger?

WAR:  So you will be in DC in July.  You always come through D.C. when you do a tour.  Actually, you are playing The Fillmore in Silver Spring, MD on July 26, 2014.  The Filmore is a great venue, like a theatre you know?

You’ve got one of the best live sounds I’ve ever heard.  This is evidenced by last year’s Live In Concert, which at times can sound almost like a studio album.  The production on that album is superb and the mixing at your live shows is really phenomenal.  How do you maintain the consistency and such a high level of sound quality and musicianship?

ZM:  “Well, its discipline.  Its discipline and it’s what I’ve learned from my parents is that we have a standard.  We have a certain standard that we don’t go below.  We have a certain way that we think about this music and a respect for music.  Work, you know.  It’s hard work.  A lot of rehearsals and keeping a focus on what need to be done fe get the music the way you want it.”

WAR:  Some people may not know that you’ve been touring since before you could walk.  You have literally been touring your entire life.

WAR:  Something else that you are passionate about is diet and maintaining a healthy intake of natural foods.  Foods that are not genetically modified or processed.  So tell the people a little bit about Ziggy Marley Organics and your thoughts on diet.

ZM:  “Well that is a likkle business venture we took on.  See we communicate our message and an idea or philosophy or bring to light our ideas using music and whatever else we can use whether its de comic book or de food line.  We have hemp seeds and coconut oil.  We talk about hemp a lot educating the people about the other uses of the plant, not de smoking side, but the nutritional side. Also the industrial uses of the plant, this give me dat platform where I can speak about it in a different light.  We get to talk about the GMO issue.  We know dat de best ting for us as human beings is natural tings.  It is not food that has been manipulated by scientists or in laboratory experiments.  Our body were not made for dat.  It like you have a vehicle mek fi run pon gas and you put water in it fe run.  The vehicle wasn’t made to run pon water it was made fe run pon gas.  So when you fe put de right ting inna our body fe mek our body work right we mind, cuz de food effect we mind too you know.  Mind..body..spirit.  The food we put in our body is very important.”

And its not just what me hear you know, me see de benefit of it.  When I was young my father he mek some concoction with some juices and as a child me seh ‘no me no want that’ and him seh ‘just drink it!’ (laughing).  But now its the same ting me do with my kids, me seh ‘drink it!’ (laughing).”

WAR:  You bring up your father.  It is difficult to put into words his influence and the impact he had in the world.  I mean, when I was younger, when I was in high school, he was the biggest thing on the planet.  His spirit is just so present.  In fact he is twice as popular today as he was when I was first listened as a youth.  His spirit and influence just continues to grow.

ZM:  “My father did…the works dat he was meant to do (pause).  It is a higher force (pause). It is a higher calling.  So, his music…his message…what he has done…(pause)…unselfishly…will continue to grow because it is not just…of man.  It is not something that is just…not something that is just (pause)…of this world.  It is something that come from beyond this world…beyond this realm.  You know…I don’t like talking bout it like this…but the truth really is that it is Jah works.  People call it God, you know, whatever, Allah, Yahweh. My father is one of those.  He is one of those.”

So I know you gotta full day ahead of you.  How can the people link with you and keep up with what you are doing?

ZM:  “Just visit my website www.ziggymarley.com.  Every ‘ting is there.”

WAR:  Alright Ziggy.  Thanks for taking the time to talk with us.  We’ll see you in DC in July.