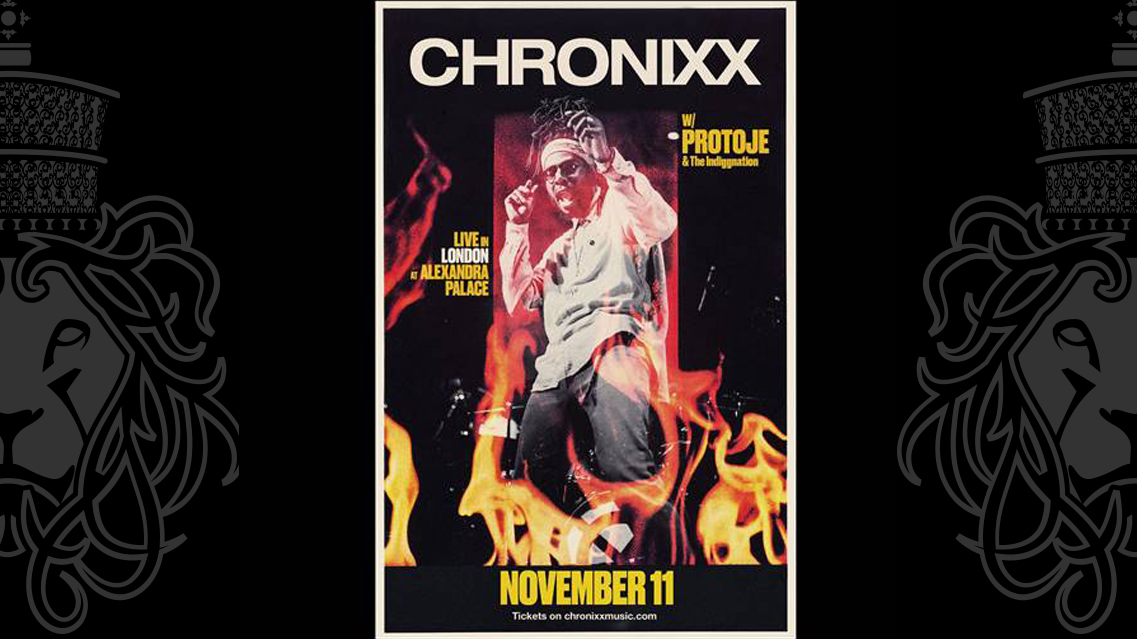 31st July 2018, LONDON: Jamaica’s highly-touted musician Chronixx announces a headline show at Alexandra Palace on 11th November 2018 today. The one-off headline show, which is Chronixx’s first London date since his sold-out show at Brixton Academy last summer, will see Protoje & The Indiggnation supporting. Tickets will go on general sale from Friday 3rd August at 10am and will be available to purchase from www.chronixxmusic.com.

Next to the announcement of his upcoming headline show at Alexandra Palace, Chronixx has released the music video for ‘Skankin’ Sweet’, directed by award winning Storm Saulter and shot in Jamaica.

Produced by French production duo Bost & Bim (Capleton, Morgan Heritage, Sizzla, Admiral T), ‘Skankin’ Sweet’ is the most streamed song from Chronixx’s critically acclaimed, GRAMMY nominated debut album ‘Chronology’. In addition to being one of the set highlights from the word-wide Chronology Tour last year (which saw Chronixx perform to a combined audience of over half a million), ‘Skankin’ Sweet’ was performed by Chronixx on the likes of Later… with Jools Holland, Radio 1Xta Live Lounge and NPR Music Tiny Desk.

Since 2012, 24-year-old singer songwriter and producer Chronixx has organically built a devoted fan-base and turned industry heads as one of Jamaica’s fastest, most-promising talents to represent the iconic Caribbean island to a global audience. Described as a “legend” (by the likes of Noisey and GQ), who is “putting Rastafarianism back into Reggae” (The Guardian), Chronixx’s own take on the roots sound has been lauded as the jump of point for a “musical revolution”.

Fans include Usain Bolt (whose Tracks & Records restaurant housed Chronixx’s first live show), Mick Jagger (who celebrated his birthday side of stage at Chornixx’s 2018 Summerstage Central Park show ), U2 (who invited Chronixx to perform with them last summer at a charity concert in New York), Jimmy Fallon (who booked him to play on his Tonight show off the back of one EP release), Major Lazer (who curated and released his first mixtape), Rudimental (who featured on ‘Chronology’), Nas and Ms Lauren Hill (who toured with him last Autumn) and adidas (who recruited him as the face of their Originals Spezial Line).