On April 28, 2014, Lee “Scratch” Perry returns to fine form with Lee “Scratch” Perry Back On The Controls.  Released on the Upsetter label, and produced by Lee Perry and UK’s Rolling Lion Daniel Boyle, the album is comprised of thirteen songs and thirteen dub versions, .  The much-anticipated project finds Perry back on the mixing board, using the very same effects units and vintage recording equipment from his Black Ark studio to produce a selection of deep roots rhythms and original “Scratch” dub versions.

When one considers the greatest, most influential, and most prolific artists of the 20th century, surely Bob Marley would top most lists. Not only did he create a whole new reggae sound, he used the universal appeal o that sound to spread the ideals of a social, cultural, and spiritual movement to every corner of the globe and single-handedly carried the weight on his shoulders for nearly a decade. While many hoped for another artist of his caliber after his passing in 1981, none would emerge and there is good reason to believe that none ever will.

However, there is one still among us who played such a pivotal role in Marley’s evolution and development as an artist, that Marley may have never made it beyond the small nightclubs and local festivals within the island of his birth. It was Lee “Scratch” Perry and his almost supernatural ear for sound that brought together the Barrett brothers, who were laying down a record a day as the heart and soul of Perry’s Upsetters, with the hardest working vocal trio in town. The Barrett brothers, with Aston on bass and Carlton on drums, would become the foundation on which Marley built his career. “Scratch,” who worked with Marley throughout his career, is now considered to be the most influential producer reggae has ever known, and few would argue that his genius and ingenuity was a major factor in Bob Marley’s development as a studio musician and recording artist.

Perry’s latest project titled Lee “Scratch” Perry Back On The Controls is a Kickstarter project and the brainchild of UK dubman and proprietor of Rolling Lion Studio Daniel Boyle. It is a concept album of sorts, revolving around the intriguing idea of “creating a fresh new sound that references the Black Ark, something new but familiar, with raw, vintage ‘Scratch style’ recording techniques.”

According to Boyle, all acoustic panelling was removed from the studio walls,old mics were married with battered guitar amps,limited equalization was used, and all imperfections were left in the recordings, creating what Boyle refers to as “a rough, yard-style music.”

The result? A brutally heavy aural assault on the senses that will shake every laptop liquidator and digital don to his core. This is foundation dub reggae at its leanest and meanest – a sound so authentic, profound, and infective that it demands not only to be heard but felt. It is the same mystical sound that descended from the densely forested mountains of Jamaica in the early 1970’s, creeping through the hills, gullies, and throughways until it arrived at the Black Ark – a block and cinder vault behind the Perry family home at 5 Cardiff Crescent, Washington Gardens, Kingston 20.

While I have thoroughly enjoyed Perry’s recent experimental work with Austria’s Dubblestandart and NYC’s Subatomic Sound System, Back On The Controls finds Perry doing what he was born to do – tracking, mixing and dubbing an entire LP from start to finish. According to Boyle this involved Perry being back on the controls, “laying down bongos and percussive shakers, hitting the effects units, and the mixing desk, buttons and knobs, as well as adding his trademark vocals” over heavy-handed roots reggae rhythms played by a talented and cohesive collective of talented musicians, in this case , the Rolling Lion All-Stars.

The album is tracked in a howcase style with the vocal tracks followed immediately by the dub versions. While Perry’s lyrics of late have been somewhat disjointed, abstract, and in some cases incomprehensible, Back On The Controls finds him in fine form, his voice oscillating between socially conscious to downright personal, and at times acting as an instrument layer in itself. While it fails to fully evoke the inventiveness and low-fidelity of the true vintage “Black Ark sound,” Boyle succeeds in creating a sound that is authentically Perry – an organically earthy sound that is heavy and devoid of the slickness that one would expect from a modern recording studio.

Lee “Scratch” Perry Back On The Controls is Perry’s best work since2003’s Jamaican E.T., for which he was awarded the Grammy for Best Reggae Album, and will surely stand as one of the best reggae releases of 2014, which is noteworthy considering how different it sounds from contemporary reggae. It is an album that even his harshest critics must acknowledge, and one that leaves unquestioned his relevance as an artist and producer. This is the album that the most serious “Scratch-heads” have been hoping for, and one in which they will find little to criticize. 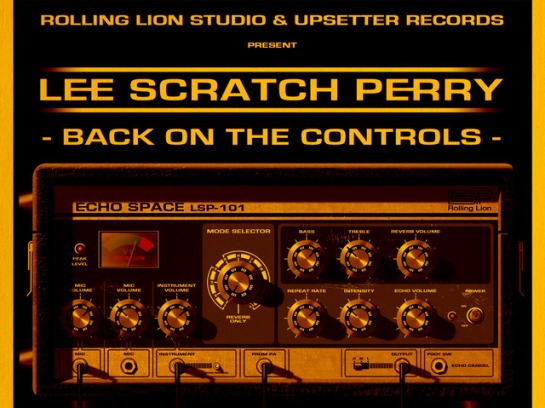 3) Come up Scratch
4) Come up Version