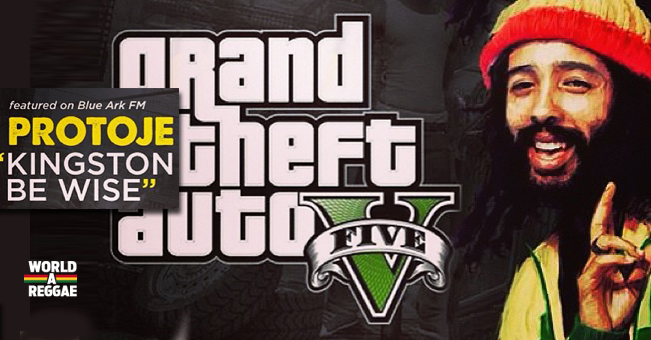 KINGSTON, JAMAICA – In the latest installment of one of the world’s most popular video games there is a special treat for contemporary reggae music lovers. Protoje’s hit single Kingston Be Wise is among the roster of Reggae and Dancehall hits on the GTA V playlist. The game was officially released on September 17, and is forecasted to sell 25 million copies in the first year.

The game, like a world onto itself, depicts a major city where players can explore and carry out missions. Often they will have opportunities to drive vehicles around town and are able to choose from a variety of radio stations to listen to music as they travel. ‘Kingston Be Wise’ is featured on Blue Ark FM as one of a select few songs from the past two years. Most of the reggae station’s playlist includes tracks released before the turn of the 21st century.

“Grand Theft Auto Fiveis already set to break sales records,” said Protoje, a leading figure in the Reggae Revival movement. “It will be a welcome boost for me because it means millions more potential ears for my music. Many of these people would probably not take the time to check out my songs otherwise.”With many worthy songs in his catalog, Protoje is pleased about the choice made by Rockstar Games, the developer for the Grand Theft Auto series. “This short story was based on the events of May 23rd, 2010, when the Jamaican government deployed its military into Tivoli Gardens in the capital city of Kingston,” the crafty songwriter recalled. “For me it is very important that the message and information contained in this song reaches to as many people as possible.”
‘Kingston Be Wise’ can be found on Protoje’s second (and latest) studio album, The 8 Year Affair, which was released to Billboard acclaim in February 2013.SOUNDCLOUD: https://soundcloud.com/protoje/protoje-kingston-be-wise
YOUTUBE: http://www.youtube.com/watch?v=FFA5e_1Mrvo