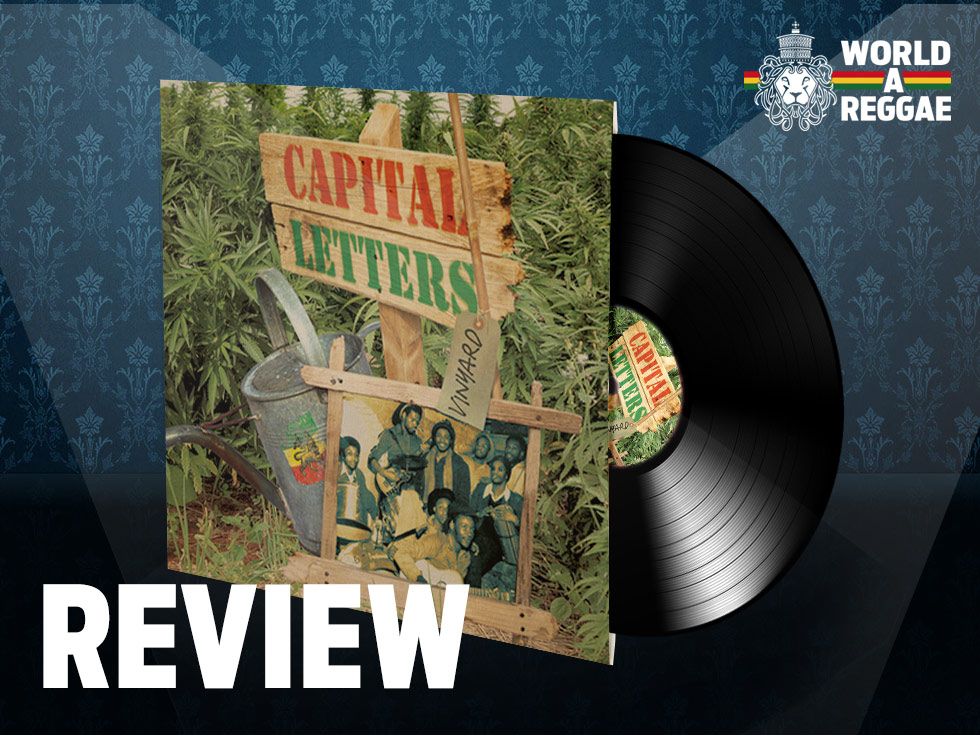 Capital Letters were one of the key bands in the British roots reggae scene that emerged in the late 70’s and were the first group to be signed to the Greensleeves label. England has been home to some amazing bands such as Steel Pulse, Aswad, Black Slate, Madness, UB40 and The Specials. The Capital Letters managed to break down many of the prejudices that reggae music could only be made in Jamaica, when authentic roots music was emerging from all corners of the UK in this case Wolverhampton in the West Midlands, a stone’s throw from where Steel Pulse’s Handsworth Revolution was taking place. This coincides with Tony Gadd of Aswad’s views when talking on Reggae Roots & Bass when explained how hard it was to be taken seriously by certain Jamaicans.

Their single “Smoking My Ganja” was a hit with its weighty bassline and caused chaos for woofers out of UK soundsystems throughout ‘78, and propelled them into the studio to record a full-length. The resulting LP, “Headline News”, was one of the critically acclaimed reggae records of 1979 with its finely balanced blend of African, Jamaican, and English influences and songs that covered topics ranging from religion to marijuana legalization to the bloody reign of Idi Amin. Jerry Dammers of The Specials has been quoted as saying that hearing “Smoking My Ganja” convinced him that the Specials mix of punk and reggae would work.

Their original album “Headline News”, also contains the full length 12” mixes of `UK Skanking’, `Smoking My Ganja’ and `Natty Walk’. The band also released the highly sought-after `Bread and Water’ 7” EP, a ska-flavored quartet of tracks, which was released in 1980 – a nod to the 2-Tone scene that was taking place in the UK at the time.

Capital Letters were big favorites of John Peel (the longest serving disc jockey, radio presenter, record producer and journalist of the original BBC Radio 1 DJs), and recorded a session that was broadcast in January 1980. Peel championed Capital Letters and for a time played a track from `Headline News” on every show over a period in 1979. As a result, `Smoking My Ganja’, `Run Run Run’ and `President Amin’, were hits in France, Spain and Holland.

The band has reformed and now Greensleevs Re-issued their 1982 Album “Vinyard”! Before I press play im extremely excited as the UK has a unique sound mainly combining the likes of SKA and Dub to create amazing sounds.

Muss Muss
First up on the album Muss Muss. I have no idea why but the guitar strokes that shimmer that open up this track instantly make me picture Hawaii! The pace of the record is set in what a predicated, a Ska orientated upbeat style. The Bassline is bouncy and is constantly walking keeping the record upbeat. The lightness of the guitar in this record reminds me a lot of the Skinhead Reggae and Trojan style music from back in the day. Nice harmonies that work well very similar to Steel Pulse repetitive / chant after every Bar. Great way to start the album… high hopes.

Murdering Style
Big drums to kick us off and when the riddim drops yet again I instantly think of records out of the Palma international camp. The keys are constantly bouncing keeping the tune vibrant and fresh. Harmonies make reappearance in this record, which walks hand in hand with the catchy hook on the chorus.

Why
A soft start to this record with a chilled tempo compared to previous records, the keys and harmonies are in place and the lyrics are the main focus of this record, lots of questions starting with Why? which you can imagine. A really easy listening piece of music and a nice change from previous records to keep things fresh.

How Far
We drum roll into How far, a very dub influenced record I feel with the speed but also the guitar wails as its stroked and the drums are far between each other. Try not to fall into a constant head bop/sway as the riddim induces you into difficulty to keep still!

Africa Bound
A nice stripped back record that focuses on the guitar and vocals throughout. The vocals are delivered in a husky manner and create a dark suave mood whilst listening to the track. The journey half way through the album has taken a turn from vibrant/upbeat style to a concentrated messaged and focus on positivity.

Oh politician
I like the start of this record as you can hear the guy’s talking/joking and there’s an element of ‘Real’ in this record as if the band all played live at the same rather than in parts and then glued on a laptop. There’s irony in this record as politics is such a dull/corrupt talking point in the UK, its interesting to compare the Jamaican artists sing about politicians and the British artists. JA seems to be focused around youth and violence prevention whereas UK artists talk about Jobs and Greed. Interesting. This song explores the issues and it’s a good listen.

Rasta She (John peel Session)
The beauty of John Peel’s session was the element of live energy and realism and the Capital Letters fully embraced this. Rasta She begins with a roots style hard-hitting drum and tight guitar stroke to set the tone of the record. The harmonies in this record are almost a hook; you could picture a sea of people singing along to the harmonies!

Fire
From the same session, the element of playing live is apparent in this record although so tightly played it could be a single and mastered. All the checkboxes of a Capital Letters record feature with harmonies and good catchy hooks with an upbeat style ska-esque riddim. A fun record to listen to with clever lyrics! “Get your bucket and the water from the well”

Smoking My Ganja
Finally on the Album and from the John Peel Session, Smoking My Ganja. A nice song to be the bookend of the book shelf. The Capital letters truly represent everything about the British reggae scene. Upbeat music with a unique style of fusing Ska and Dub whilst using harmonies to create sing a long style hooks.

Conclusion on this one is that this is a great representation of (UK) Reggae in 17 tracks, an album for you to definitely go and buy and take the time to listen and appreciate!